Foreign Objects in a Neglected Pool 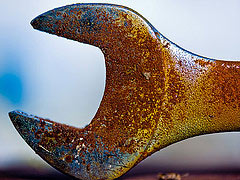 Photo Courtesy of HVargasThe Kuosheng Nuclear Power Plant in Taipei County, Taiwan recently made news for some Foreign Material Exclusion activities (Taipei Times). The plant was called an “absolute disaster,” by the subcontractor commissioned to clean the plant’s suppression pool – A vital component where debris causes concern. Some of the foreign objects that were found at the bottom of the pool included cable spools, oxygen tanks and masks. The article goes on to describe the plant’s pool as a “garbage dump,” with debris continuing to fall as the divers were doing their work.

The article notes the FME rules as, “any object that is taken into a suppression pool must be taken out.” The terminology used in the article may be different than the plants (or contractors) actual procedure terminology, but the focus of the statement seems to be on retrieval rather than prevention. It’s like saying, “My eating requirements are that all insects are removed from my soup prior to my eating it.” I don’t know about you, but I’d much rather prefer that no insect made it into my food to begin with.

The excess sediment found in the tank was coupled with “massive corrosion.” A common trait of poor FME practices is the increased rate equipment decay. Like a neglected car, plant components that don’t have proper contamination controls will wear down faster than those with effective measures. The foreign material in this article, coupled with the neglect that was allegedly occurring, led to the degradation of plant components.

The mechanical section chief said that the plant has put a lot of effort into maintaining cleanliness including, “performing FMEs and putting a removal protection cover in some areas” It sounds like the section chief thinks that FME is a process of removing debris from the pool, rather than a method of preventing debris from entering. He may be using FME and “debris removing session” interchangeably. If that’s the case then there needs to be some retraining.

Assuming that the wording used was simply something lost in translation, there was still nothing mentioned about other common measures of an FME program that help prevent debris: methods like those listed below.

There are measures available that limit foreign material proactively. They include floating materials, fail-safe devices such as lanyards, thorough and efficient coverings, and small parts and debris control. All of these methods should be combined with a long-term shift in thinking in order to keep nuclear power safe in the future.

Use our lanyard selection form and we'll help you get the right lanyards for the job.