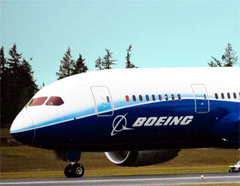 Photo Courtesy of Dave SizerOn November 9th, 2010 the Boeing 787 Dreamliner had what now seems to be a recurring nightmare: A fire broke out in the aft electronics bay kicking off what would be another in a long line of program delays. The world has learned that the seventh Boeing 787 program delay was started by a foreign object (ABC News). This comes as surprising news because Boeing has typically been regarded as an industry leader in FOD prevention practices (National Aerospace FOD Prevention, Inc.).

The debris in question was originally suspected to be a tool but some sources think it may have been a small piece of hardware or a washer (All things 787). The damage it caused was much clearer:

The most direct cost created by the foreign material is the damaged equipment itself. Boeing had to replace the power distribution panel and repair damage to the interior and insulation (The Seattle Times).

42 crew members were onboard at the time of the incident. One was injured during the evacuation. The potential results of the FOD sparked event could have been much worse, and all because of a tool or a washer. (All things 787).

The 787 project is already three years later than originally expected. This mistake will cost the company valuable time. Some estimates range from three to six months and beyond. Jim Albaugh recently implied that Boeing would be missing its planned first quarter of 2011 target.(Los Angeles Times).

The day after the incident, Boeing Co. Shares fell 3.2% as a result of anticipated program delays (The Seattle Times). This is also an indication that investors are losing faith in the company. The integrity of the company’s long standing reputation as a leader in FOD Prevention is also called into question.

Many believe that the problem truly stemmed from Boeings outsourcing for parts manufacturing (The New York Times). Specifically, the French contractor Zodiac was mentioned by a French newspaper as the source of the debris (La Tribune). Regardless of the source of the problem, there are always lessons to be learned. It’s better to focus on solutions than to try and spend time placing blame and pointing fingers.

Several measures could have been implemented to reduce the likelihood of an event like this. Looking back at the cause of the incident (either a tool or a washer), stronger parts and tool control may have helped prevent the situation. The contractors that work with Boeing also provide insights as to how corporate culture plays an important role in FOD prevention.

Preventative parts control consists of bringing the minimum amount of necessary parts to a FOD controlled area and keeping small hardware contained or secured at all times. Some tools that allow this control are parts bags and magnetic trays.

Preventative tool control is accomplished through the use of log sheets, lanyards, and tool shadowing. Lanyards attach equipment to the user so it cannot be dropped or left behind. Tool shadowing makes a missing tool from a kit easy to recognize. Log sheets, or electronic tracking keeps track of the materials used on a job and will help identify unaccounted materials.

The culture of an organization plays a pivotal role in the success of its FOD prevention program. Boeing stresses the importance of FOD prevention, but if its contractors don’t have the same respect for the hazards of FOD, then accidents like this will continue to happen.

It is not enough to do a sweep of the area after a task is complete, especially when debris generated during the work may be sealed into non-visible areas of the manufactured component. Preventative measures should always be taken to reduce the risk of foreign material. Even with a solid system of FOD prevention in place, accidents can happen. The only thing a company such as Boeing or Zodiac can do is learn from its mistakes, and make sure that proper controls are implemented if they are not already.

Use our lanyard selection form and we'll help you get the right lanyards for the job.